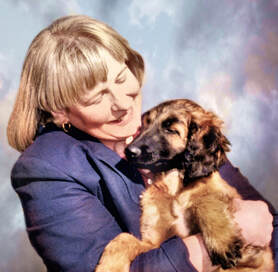 Diane with an Afghan Hound puppy
Diane is the founder and president of Animal Behavior Management, Inc. | Clixworld Boarding which has provided both dog training and dog boarding for St. Charles IL, Geneva IL, Batavia IL and surrounding areas. She has professionally bred, trained and shown dogs for 49 years, but she "began in dogs" as a young child showing her Miniature Poodle in local pet shows and parades. In 1971 she started Kushan Afghans, a show and breeding kennel as part of an international effort to preserve the mountain type of Afghan Hound. Her university training is in the History of Art and Architecture, and she has served on the Board of Directors of several local organizations including Garfield Farm Museum.

Diane worked for 5 years at a veterinary clinic, developed their Pet Loss Program (a service for grieving clients whose pets had died), began the clinic's Puppy Parties for socializing baby puppies, and fielded calls concerning behavioral issues with client's pets. From 1992 on, Diane has attended numerous classes, workshops, seminars and conferences. She has learned from some of the greatest minds working in her field and has traveled across the country to broaden her understanding of canine behavior, especially aggression disorders.

In 1993 Diane founded Animal Behavior Management, Inc. after recognizing a huge void in quality dog training being offered to the public. In that same year, she became a founding member of the Association of Professional Dog Trainers to encourage professionalism and science based training on a national level. That organization has grown to over 5,000 members and is now recognized on an international level. Diane's membership card still proudly bares the membership number 5. She is currently retired from dog training, now devoting her time to giving her expert care to the dogs boarding at the Chandlers' Clixworld  Inn.

Diane and her husband Ron live with their Afghan Hounds Diva and Jazz. Her hobbies are gardening and restoring their 1880's Victorian farmhouse, photography and art. 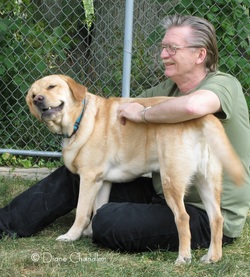 Ron playing with a guest.
(AKA “The Great Spoiler of Dogs” and “The Human Cookie Dispenser”)

Ron is chief cook and bowl washer for the Inn. Although he shares Diane’s passion for dogs, his skill set lies in the hospitality field. He has spent his adult life looking after and caring for dogs; first with their show and breeding Afghans, and now with the addition of the Inn’s canine guests. He has an inherent ability to make dogs feel relaxed and comfortable. Ron is a talented ear scratcher and is well versed in tummy rubs. Because the  Inn is a small establishment, there is plenty of time to give all the dogs several romps in one of the dog yards every day. Ron enjoys playing with all of our guests and the dogs know it. You can be assured that Ron will guarantee a comfortable boarding experience for your canine friend. It is no surprise that when client’s come to get their pets from the Inn, they run back to Ron for one last “good-bye".
Our dog boarding kennel serves families from St. Charles, Geneva, Batavia, Campton Hills, South Elgin, West Chicago, North Aurora, Wayne, Virgil, La Fox, Sugar Grove, Wasco, Maple Park, Lily lake and Elburn IL. DuPage County and Kane County IL. We look forward to working with you!
copyright 2023 Animal Behavior Management, Inc.   All rights reserved.   All images © Diane Chandler unless otherwise noted.
Powered by